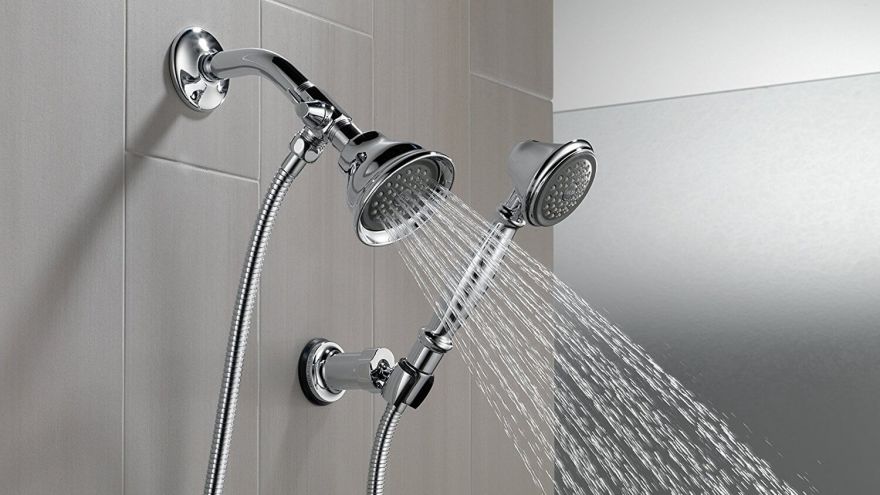 Let’s face it. There is nothing quite like a long, hot shower. Even in the worst case scenario with a standard, barely dripping tub-shower unit, after a long day, that shower is the only thing on your mind.

Your shower though is a place where you can maximize potential at a reasonably low cost and without much hassle. Whether  your shower lacks water pressure, or your simply looking to turn a hygienic necessity into a meditative and relaxing experience, there is much you can do to transform your shower from coach to first class.

In any case, it starts at the shower head. In this article we outline shower head types, as well as a few shower improvement hacks and our favorite products of the year.

Wrong. There are a ton of styles, types, and functionalities to consider when looking to make an upgrade.

A standard shower head is relatively simple. It threads onto the water pipe at the top of the shower and directs water through a series of holes to create a wider stream of beads. This ensures that more of your body can be showered at one time than would be the case if the water came directly from the pipe in a single stream.

When you enter into a world where showering is a luxury, however, there are other elements to consider. Shower heads come in a variety of styles, finishes, and spray patterns. For our purposes, though, we are breaking up our best of list into two distinct categories: shower heads that detach into a hand held sprayer and those that do not.

A hand held sprayer is appealing to someone with small children, a pet, or even an elderly relative living with them because it allows the user to reach any area without contorting their body to the stream. This gives them extra control over what and how something is washed.

Handheld sprayers also allow for your shower to be cleaned much more thoroughly as a fixed nozzle will not reach certain corners of the shower basin itself.

Multi-pattern shower heads have a twisting feature that allows the user to change how the water is channeled through the nozzle. There are typically settings that allow for tighter pressure, or rainfall-like water flow.

This becomes really important if you are in the business of either increasing water pressure or conserving water consumption. In some cases, shower heads feature spray patterns capable of putting out or conserving up to 3 gallons per minute of water.

Chrome is by far the most popular shower head finish because it is shiny and easy to clean. However, depending on your personal taste, you can typically find the same functionality of a particular head in bronze, brushed, or other finishes to match your shower’s existing hardware.

Another bucket of shower head types is that consisting of water conserving shower heads. The Environmental Protection Agency (EPA) reports that American households use an average of 60 gallons of water every day.

This number has been a national requirement since 1994. Recently though, the EPA has made further recommendations for more vast conservation efforts. These are the  WaterSense recommendations and suggest 20% less output than the two and half gallon per minute standard.

It is important to note that while WaterSense is merely a recommendation, and thus is optional on a national scale, some states have passed laws that require all shower heads sold to be at the WaterSense mark.

Here are the considerations we made in rating the best shower heads on the market today.

This is how we rate what a shower head does and how well. Coverage refers to how wide a shower head is capable of dispensing water, either through its standard setting or one of its pattern adjustments.

Good design is all about user friendliness, as far as we are concerned. The highest rated shower heads are those that you can use with great efficacy if you are a guest in someone’s home for the first time.

Some examples of good design are as follows:

Silicone nozzles also get added points because shower heads of this type are so much easier to clean.

If it is made to last, from good material, and will keep its finish for years to come (mainly due to the type of finish and the degree to which that finish is applied), then it is of good quality as far as we are concerned.

For instance, plastic shower heads are fine, but you cannot argue that one will hold up longer than a metal one.

There are also quality implications reflected in this review concerning installation and whether or not a shower head leaks after anything other than threading it on with a wrench.

This is a great choice in general, not just of handhelds. With a nice spray pattern, the Magnetix Attract is easy to use and, most importantly, affordable.

This shower head has great coverage and enough adjustable patterns to give shower enthusiasts of all types exactly what they are looking for. The adjustable rotary changes patterns easily and the water conservation mode, which puts out just two gallons per minute, still feels formidable.

The best part of t Moen – Magnetix Attract is in the name. The magnetic dock makes pulling and retracting the handheld super easy. The magnet is strong, but still releases without much effort. There is never a worry about whether it will hold OR whether the force you generate in trying to pull it will damage the shower wall or piped system.

While you might not be sold on the magnet at first, after awhile you will realize the value. When compared to other handhelds, which require some precision and focus to reattach the handheld to its narrow sleeve, the Magnetix is a breeze.

Certainly, there are other magnet systems for shower heads, and still, Moen’s takes the cake. It is easiest to use featuring the perfect amount of magnetism, and is also the most affordable of the bunch.

Installation was more than just a wrenching. That said, the rubber gaskets included in the kit sealed the fixture completely after just a hand tightening

This head earned its place at the top of the fixed head list mainly due to its quality and coverage. With water conservation at the forefront of industry manufacturer, more and more shower heads have adjustable pattern heads. Some change more easily than others, and often some settings are completely unusable.

The Velocity provides great coverage on the wide setting that feels like it is purposefully designed to maximize the width of the design.

Then, with the flick of a lever, the water concentrates into an efficient and narrow stream. It is the lever, though, not the stream, that  is the real highlight of this product.

The adjustment lever is so much easier to use than any other means of pressure or pattern adjustment out there.

The Velocity also holds up in quality with respect to look and finish to the highest end of the market. Still, this shower head is not necessarily cheap. That said, for what you are getting in terms of design, quality, and coverage, it is worth the price.

Installation is easy and leak free with a wrench, and the fixture itself cleans well. The Velocity is metal, feels solid, and comes in a square-corner shape in addition to four other colors and finishes.

The Rest of the Field

The subsequent three shower heads are not categorized as handheld or fixed, but each features a rating out of 5 for spray and coverage, design, and quality. We will also share whether or not the shower head has WaterSense capabilities.

Having considered all the possibilities of shower heads and what consumers want out of their fixture,  the Moen Magnetix Attract holds up regardless of fixed or handheld. It’s easy to use, easy to install, has great coverage, a wide array of patterns and looks the part.

That said, for the more economical choice the Speakman Reaction fixed shower head is the way to go. It doesn’t have all the bells and whistles but its single setting features the best balance of coverage, force, and water conservation.

Regardless of what you are looking for, however, there is something for you on this list. Consult this review before your shower upgrade to ensure you enter into any showroom or home improvement center as an informed and purposeful consumer.

How to Get Rid of Big Time Floor Stains Without Calling a Pro May 08, 2020