How To Remove Baked-On Window Film In 4 Easy Steps 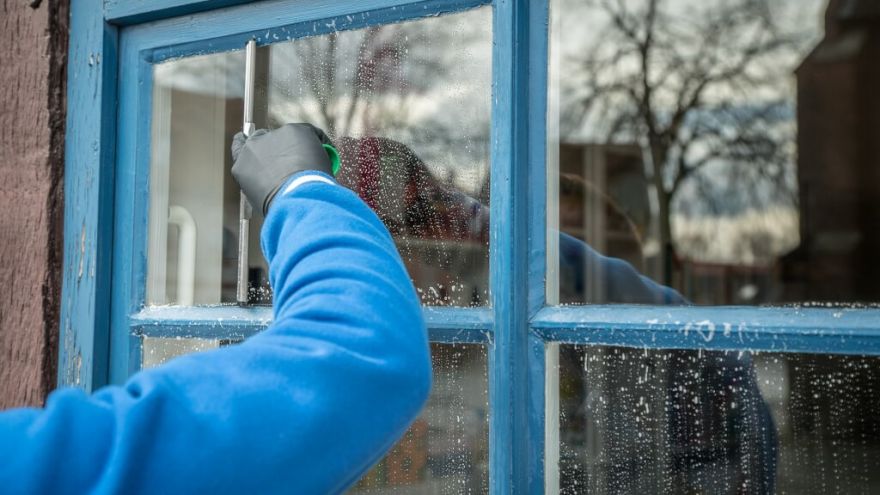 How To Remove Baked-On Window Film In 4 Easy Steps earlyexperts.net

Window film is an excellent way to add privacy to a home, office, or vehicle window while blocking heat and sun glare. It is made to last a long time and can even be left in place for 10-20 years. After the film has been subject to the sun on a window for a while, though, it may be hard to remove. How do you remove baked-on window film as easily as possible when you want something different, or the film becomes scratched, damaged, or affected by weather?

Whether you want to remove it altogether or replace it, you must remove both the film and the glue residue for a clear window and a smooth surface if you are laying new film. There are four basic steps to removing window film:

In a perfect world, you may hope to loosen an edge and then pull the film off. This works with static sling products but seldom with window film. Whether the process will be that simple depends on factors such as the quality of the materials and the original installation, plus the exposure to the elements that the film has withstood. A window oriented on that property to get lots of sun with few trees or other features that provide occasional shade will be more challenging when removing the film.

Before removing the glue, you will need to have some supplies on hand.

The first step in removing any window film is to soften the adhesive. Washing the window with warm water and detergent to remove residual dirt will start the process. The water will begin softening the glue.

Once the window is dry, the safest way to dissolve the adhesive is to use a heat gun, steamer, or even a hairdryer. By aiming the heat at the window, the glue softens so that you might be able to pull the film away in large pieces.

Alternative methods to soften the glue are to use vinegar OR ammonia with water. Mixing the two produces unpleasant fumes. Since vinegar is an acid and ammonia an alkaline or base, the two cleaning agents cancel each other out – so use one in a well-ventilated area. Spray a mixture of vinegar or ammonia with soap and water on the window and allow it to sit, respraying as it dries. You might cover the area in plastic wrap to hold in the moisture and leave it overnight.

To prevent damage to the wood, wipe up moisture that accumulates at the bottom of the window or on the sill, especially if using ammonia. If you are removing tinted film in a vehicle, avoid ammonia as the fumes can damage materials.

The best time to work on film removal is when it is sunny, so the sun’s warmth aids your efforts.

After softening the film, corners may be peeling up. If not, slide a razor blade under the film at one edge to dissolve enough film that you can get a grip on it. Start pulling the film so that it comes off in a sheet or large pieces.

If the film is resistant and breaks off in small pieces, apply heat or chemicals again to soften the adhesive. Once the glue is soft, you can use a paint scraper or straight-edge razor held at an angle against the glass to remove the bits of film. The job will be more demanding if the film has been baking in the sun for years.

Even if the film comes off easily, there may be a residue of adhesive that you must remove for a clean window, especially if you want to reapply the film. Usually, spraying with vinegar and water will leave the window looking great. Products such as Goo Gone or WD40 can do the job, too, as you just have to apply the product, wait a minute, and rug off with a soft rag. You can also use nail polish remover or rubbing alcohol.

If all else fails, you may need steel wool to remove stubborn residue. Rubbing too hard can scratch the window; try other removal agents first and proceed carefully if you need to try steel wool.

After removing the film adhesive residue, wash the window with clear water or a window cleaner, and you’re done!

Your window is ready to go if you plan to apply new film. For best results and easy removal in the future, buy a reputable brand known for easy removal. Cheap window film does not always block UV light and can be more difficult to remove. Brands offered by 3M, Avery, and Metamark list their sun-blocking and privacy properties; reading reviews from other users will give you valuable information about the ease of removal.

How To Remove Ceramic Tile From A Concrete Floor Jan 07, 2022

You never get a second chance at a first impression, so when visitors come to call, your front door can say much more abo...
30 Sep 2021
35338
Sign up