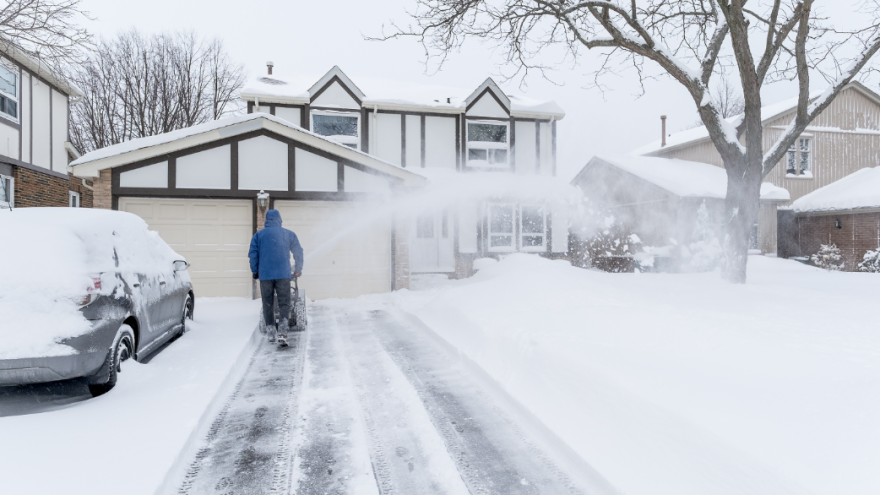 The first snow of the year has fallen and that means that it’s time to clear away those frosty flakes. Unfortunately, many people often go about this the wrong way resulting in more frustration and work than necessary. You might wonder if there is a better way to get rid of snow and ice without breaking your back chiseling away at the driveway. Luckily, there is a more efficient way to clear this area after a fresh snowfall without spending hours outside. While we can’t go out and remove the snow for you, we can definitely provide you with a few tips to help you to remove the snow in less time with less effort.

Before running outside with your shovel in hand, it helps to have a plan in place. You could just go and start shoveling, but you might find that several hours later you may not have made much progress as you thought. Even worse, you could increase the chances of an injury to occur because of how you’re clearing the snow. By having a plan in place before going outside, you will be in the right place to get rid of all of that snow.

Make Sure That You Have the Right Tools

Whether you are using a shovel or something with a little more power, it helps to make sure that all of your equipment is fully functional. This means that your shovel is not old and rusted. If using a snowblower is more your speed, make sure that it is fully gassed up and that the components are free of build up. It’s recommended to use shovels for smaller areas such as walkways leading to the house or smaller driveways. For wider areas, snowblowers have the ability to clear large amounts of debris in a short period of time.

Make Sure that You are Wearing the Right Gear

While it’s tempting to go out in jogging pants and a thin shirt, the better option is to throw on a few more layers. This is especially important during winter when exposure to lower temperatures even over a short period of time can bring on frostbite. Make sure that you are wearing thicker shirts or sweaters along with heavy-duty, water-resistant boots. Snow can seep into sneakers, making for a soggy clean-up and increase your chances of catching a nasty cold.

Don’t Drive Over the Snow and Ice

It can be difficult to properly remove snow from around vehicles. However, when trying to remove snow from your driveway, it’s best to avoid driving back and forth over it. Snow and ice that is currently on the surface will be packed down, making it more difficult to remove. It’s recommended to first remove the snow followed by adding salt to the driveway. Adding rock salt or another gritty material specifically made for winter weather will help tires maintain traction and nor slide around.

Don’t Pour Warm Water Over the Ice and Snow

You may have heard about a liquid recipe made from combining warm water, dish soap, and rubbing alcohol that will melt down snow and ice from the pavement. Unfortunately, this is not the case. Pouring this substance or warm water in general over snow will only cause more ice to form making the surface dangerous to work with or walk on. There are chemical solutions out there that are specifically meant to melt ice and snow. However, you can still not just pour it and forget it.

When removing all of that snow, you will want to get the job done as quickly as possible while making sure that it’s done right. The exact amount of time that it takes–once you have a plan in place–to clear walkways and driveways will vary depending on how large the area is. However, there are a few ways that you can make it easier to take care of this often annoying chore.

Clear the driveway in sections: To avoid tiring yourself out too soon, breaking the driveway down into smaller areas will help you remove snow more quickly. This is especially helpful for larger driveways.

Using a 4-Tine Fork Instead of a Shovel: This is a little secret that a lot of people don’t know about. A 4-tine pitchfork is better to use than a shovel to break up snow and ice. Why? The prongs break apart snow and ice quickly so that you easily can get under it to pull it up. Once the compacted snow is broken up, you can come back and clean up the pieces using a shovel.

Don’t Clear the Driveway Where It Meets the Street: During a heavy snowfall, you may want to clear your entire driveway all at once. You’ll need to resist this urge though. City or privately owned snow trucks will be out in full force removing snow from major streets and intersections. If your driveway faces a major roadway, then chances are high that the snow that you just cleared will return again once the trucks come through.

Now that you know how to remove snow from your driveway so that it’s less of a headache, it’s time to get to work. While there is always the option of installing a heated driveway, this is not the best option for those on a budget. Sometimes all it takes is working a little smarter when it comes to clearing away heavy snow. With this new knowledge along with a plan of action, you’re ready to take on Mother Nature this winter. This means that you can spend more time indoors enjoying a warm drink and less time outside shoveling cold ice and snow.

You never get a second chance at a first impression, so when visitors come to call, your front door can say much more abo...
30 Sep 2021
37996
Sign up