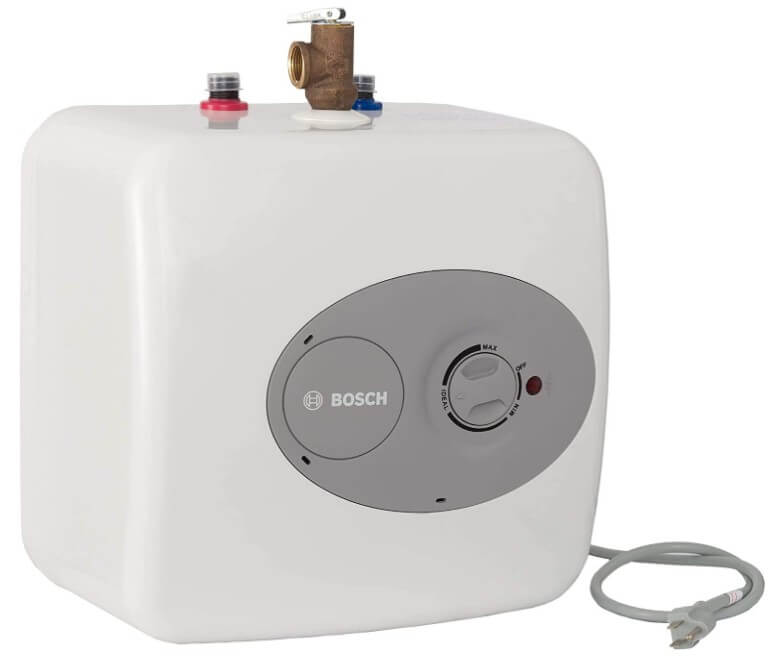 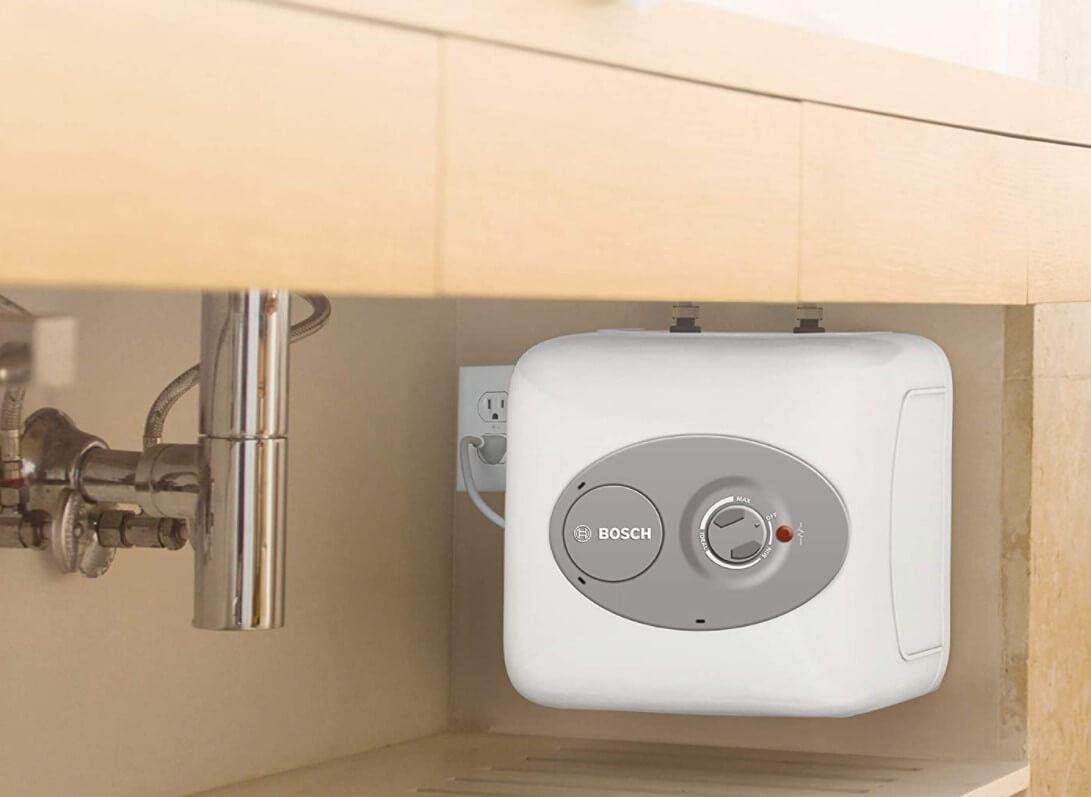 By Brian
Editor’s Conclusion
In the Bosch product line, 3000 is a busy model number. Along with a series of five point-of-use (POU) tankless electric water heaters, the Bosch Tronic 3000 is also the base model number for their mini-tank electric system for use under sinks. The two branches of 3000-series heaters provide instant hot water without heating a double-digit amount of water.

These compact units can be hung on a wall or installed underneath a sink or even in a cabinet. Except for the US12, they feature 360° orientation so they can be installed horizontally or vertically.
Editor's Pros & Cons
Pros

Easy to mount on a shelf, wall, or floor by simply tapping into the cold water line

Units can be mounted horizontally or vertically (except model US12)

As low as 0.3 GPM activation rate

Some heat loss of stored water

Electricity used to keep a small tank of water warm

Amount of warm water limited by the size of the tank

Lacks a thermostat to regulate temperature

Some complaints of premature fail

Reset button but hard to reach

Warranty can be voided if not professionally installed

The two types of Bosch 3000 Tronic heaters are point-of-use (POU) or point-of-service (POS) units. While the tankless Tronic 3000 models are designed to be hard-wired into the breaker box, two of the three mini-tank models can be simply plugged in after connecting them to the waterline.

Because there is no tank, the 3000 units have a flat, sleek appearance, while the 3000 T models with a small tank have a more boxy appearance.

Both Tronic 3000 tankless and 3000T with a small tank are energy savers that are 98% efficient; they have no standby loss like with a full-sized tank.

The mini-tank models have an external dial to control the temperature, but the tankless models have a more Spartan appearance with no external controls or eye-pleasing digital displays featured in other models by Rheem, ECOTOUCH, or EcoSmart.

The Tronic 3000 T POU heaters are the perfect solution for a variety of applications anywhere you need hot water produced at the point of use, such as at a sink or in a small home, RV, in-law-suite, or office. Two of the three models just plug into a 110 V outlet. They have a boxy appearance as they have a little tank.

When hot water is needed, rather than heating a large tank, the tiny tanks used in 3000 T models provide instant hot water. As with a larger tank heater, the mini warms the water in the tank and some heat is lost through connected pipes; if you insulate the pipes, you can lose minimal heat while and still have a few gallons of hot water for washing hands. This model saves water as the stored amount always keeps the tank filled with heated water so there is never a wait when it is turned on.

The models are promoted as a solution for sinks in both residential and commercial settings and are useful for three applications:

As Bosch Tronic 3000 tankless models work from a water line, they produce an endless supply of hot water that makes it useful for light commercial applications in airports, stadiums, and shopping malls as well as residential use. When the water is turned on, the flow switch senses how much water is passing through the unit, and if it detects more than the pre-set level, the unit’s heating elements switch on. This is shown by the neon light glowing. Reaching the right temperature might take a few seconds, especially in colder climates where the groundwater comes in at a lower temperature.

Like all water heaters, both the tankless and the mini tank are sensitive to hard water. Excess minerals in the water can lead to a shorter lifespan, lessen performance, and compromise the warranty, so installing a water treatment and conditioning program will lead to improved customer satisfaction with the unit.

Comparison To Other Water Heaters

Coming from a much larger company than other water heaters, Bosch has a wide range of models – but few models earn top ratings. (Some critics blame this lack of quality on the size and lack of attention to particular product lines.)

The tankless Bosch Tronic 3000 has nearly 5,300 ratings on Amazon with 77% 5 stars and 11% 4 stars. and the remaining 11% 3 stars or less. The mini-tank versions have similar stats. The numbers show that while most customers are satisfied, the balance is not, and often have complaints that the unit failed or was simply too small to do what they hoped.

While complaints that units did not meet expectations might be mean that buyers did not properly assess their needs and should have chosen a more powerful unit, the number of complaints about quality might make a prospective customer question whether to buy a Bosch.

Other small tankless products might be a better choice. Even the ECOTOUCH POU unit has more frills while having some of the same size limitations. Better choices for slightly larger but still small units include:

Those who do opt for any of the Tronic 3000 models should expect no more than water at the sink.